Updates
- New mage! Well, old mage, new look. "Arc" replaces the generic arcane wizard. His casting animations are a little effed up, but otherwise he's movin' and groovin'.
- First boss! He is just a large mage that can use any move, sometimes without cooldowns. Can get to end of adventure mode to challenge him, or just select him in practice mode.
- Added some new stuff to forest level! Now it is more than literally just some bushes and trees...
- Can cast secondary move with controller now (LB to start cast then right joystick to move it)
- WIP controller navigation for menus (only works on main menu right now)

Cool stuff this week! The artist I've hired is awesome, and has bestowed upon us the first real character for the game. I'm calling him 'Arc' for now, and he replaces the incredibly ugly, only a mother could love it, generic wizard model for the arcane class. The rest of the classes still will be using the outrageously bad (I'm exaggerating now but really I hate it) old model. 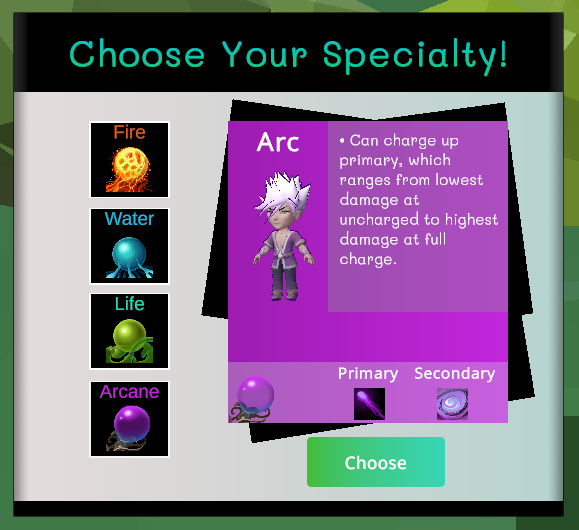 Next on the agenda will be adding an "ultimate" system for each character, where they can power up an ultimate across matches, saving it for a particularly strong opponent. And also I'm working on the second boss, which will be more of a proper boss and less of a "hey I have this wizard model laying around, what if I just use that".

Beyond that, I'll probably be adding new upgrades and slowly turning adventure mode into a more enjoyable, varied experience. Right now it is very very basic and bland. I'm slowly working towards full controller usage in the game, but we're not quite there yet. Thanks for reading!